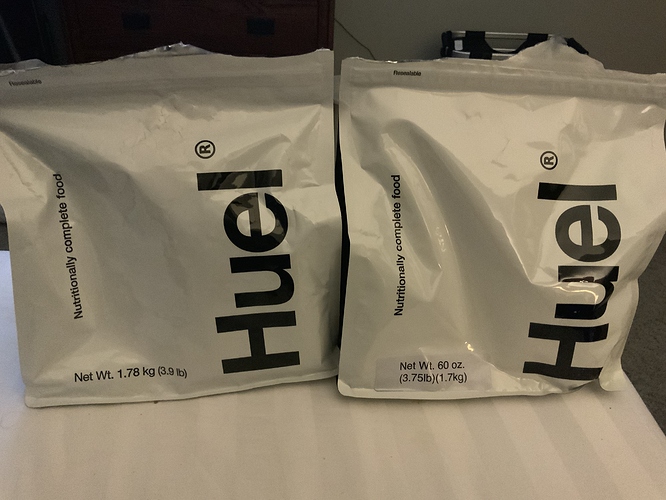 The new HUEL v1.1 has 60 oz down from 62.5 oz with their older formula.
NOT HAPPY, also the scooper is larger so you put more HUEL in.

Don’t think we wouldn’t notice, I’m very disappointed in these practices with the whole less is more marketing,

I’m pretty sure the amount of meals/ calories per bag remains the same though.
7000kcal, 14 meals of 500kcal.

You are talking about a discrepancy of 80g which is about 320kcal. Probably something to do with the new formulation being more compact.

The larger scoops were used to adapt more efficiently and try to make dosaging with scoops easier (lots of people complain it did not make sense because 3 scoops would be around 450kcal).

As long as you use a scale, it should last a similar amount.

I think this issue may have been addressed by @JamesCollier in another post. They changed the formula for new Huel very slightly. It ended up being slightly more calorie dense as a result. I think they changed the omega 3 to omega 6 ratio of the fats. But the end result is that you are getting the same amount of total energy and nutrition per bag as the old formulation.

The new scoop and service sizes might be to simply things. Since the RTD Huel is formulated as a 400 calorie unit does bottle, it makes sense to relabel the powdered Huel as a 400 calorie serving suggestion and to remake a scoop to enable measuring a 400 calorie dose much easier.

There’s no deception or conspiracy going on here. It’s still affordable and quality complete food. And the nee berry flavor is great.

Sorry you feel this way. The changes in the new version are discussed here. Huel is based on calories and there always has been and still is 7,000 calories in a pouch. With the recipe tweak, some of the ingredient ratios are different to provide the better nutrition. Sure, this may mean there’s a very few grams less of powder, but the nutrition you’re getting is still based on 2,000 calories.

Furthermore, when we launched Huel in the US we didn’t realise we were only supposed to put the weight in kg to 1 decimal point. This is a legal thing and so, to conform, we’re now doing this. We are actually filling to 7,000 calories though and this is 1.74g, even though the pouch says 1.7kg

The serving and scoop size has been changed for ease. We used to get a lot of issues in the US where the serving size didn’t make sense. Now it’s nice and simple: 2 scoops = 100g.

So, I would say that you’re getting the same when comparing v1.0 and v1.1 but, of course, that would be incorrect, as you’re getting more for your money now with v1.1.

I hope this makes sense; but if you’d like any further clarification, just tag my name in here

The wait is only different by like 2 ounces. You are actually using less. The scoop is larger, but you are putting two of them in. You now have 17 meals instead of 14 meals. This is why we have to be with the simpler version now because someone like you can’t understand things and won’t look them up. The calories are the same as the ready to drink one now. It was probably decided that we are so stupid that we couldn’t deal with two separate sets of calories for two different formulations. And I guess that makes sense because you are the first complaint I have seen about a minor, 2 ounce difference in weight that just occurs because the formula changed. Then, apparently, no one got the memo that the ratio of 1 to 5 is by weight, not by volume. That means that if you put 100 g of Huel, You add 500 g of water. It does not mean that you add 1 cup of Huel and then do 5 cups of water. That would be ridiculous, so it is pretty obvious that it is by weight. And now because of things like this, we have to be on the simpler system while the other countries stay on the more advanced system.

Hey, don’t attack someone for noticing there is less product in the bag for the same price.

I was also initially dismissive of 71g/bag - but thats about a serving and a half from the 2 bags you get for 66 dollars. It is weird to see the new bags have 3 more servings despite less weight in the bag. So if v1.1 is somehow more nutritious then the response to the OP should better illustrate how/ why this is true. Surely you’ve noticed the size of candy bars, bags of chips, bottles of beverages, etc have all gotten smaller while their price continues to go up.

I thought you posted a legitimate question Miked. Wow, just wow on the response.

But there really is not less product. There was just a minor weight change because of the formula change. Product is around 3 pounds, and there was a change of a few ounces because the fats and things in the formula were modified. Volume wise, it would be the same, and weight wise, it is so similar that you can basically use the scoops from the old formulas, and still have the same amount of calories. If the product is around 3 pounds, and then it is around 2 pounds, it would make more sense that you are mad that there is less product. You act as though they designed the formula to have less product. The weight change is so insignificant that it probably is not the case. Fat, protein, and carbohydrates all have different weights, so if you modify the ratios of those, the weight will change. It sounds like they added a little bit more fat to optimize the omega-3 ratio. If the flaxseed powder or whatever they used weighs less than oats or the other ingredients, then the formula might weigh a little bit less. But honestly, the 2 ounce difference doesn’t affect the calories, how many meals you get, or anything. Maybe volume wise, something like a quarter or an eighth of a teaspoon is taken from each meal, but it isn’t really very noticeable if that is the case. Or the volume could have remained unchanged while the weight just decreased slightly. You can tell me not to attack someone for this, but this whole thing is just ridiculous. And now we have to be on the simpler scoop system while the other countries get to be on the more advanced system because of things like this. He told us that the formula was changing. Even doing something like using a different flavoring system could cause this small change in wait.

Weight is about as good a measure as you can get to answer “how much stuff is in this bag?”

If there are more servings in a bag (17) than there used to be (14) then there should be some explanation for how we get 3 more servings per bag when there is 71g less ‘stuff’ per bag.

Compare: convenience store beverages used to have 12 oz cans and 20 oz bottles. Now you see 18.5 oz bottles in some products, but they’re sold at the same price point as their 20 oz cohort.

I don’t really care, tbh. I thought John56 was a bit dramatic when I first read his post (I don’t like to see anyone not happy with Huel) but I later deleted my snarky reply. He has a point. We want to get the most from every bag. Some choose Huel for the calorie per dollar ratio, and even the change of 71g per bag is enough to ask what is happening.

Not really. For example a salad might weigh a lot less than a half a cup of peanut butter, but I would say you are giving me more food if I have a salad.If they change the price, it would change by pennies, and this product is sold by the meal anyways.

I know you said you don’t want to think about it anymore, but I think I know the answer. They can’t put fractions of a serving on a bag, so they rounded down.

I would bet most of us use a bit more huel for each serving. I know I don’t weigh my scoop, it’s more of a heaping scoop, so I can cheat and get more calories. New flavor seems good, new scoop is better, bag size is fine. Glad to have it.