The new vanilla is inedible. I’m really disappointed in the way that Huel handled this switch, too. There was no lead time to allow people to stock up on Original, it was just simply gone one day.

I’ve seen others talk about how you can edit an existing subscription, but I don’t have one. I’ve been consuming mostly Huel for many months now, but apparently, I have been ordering incorrectly (essentially starting a new subscription each time because I was unaware could “edit” an existing one).

This isn’t a new flavor of chips or the end-of-life of your favorite flavor of Gatorade - we literally LIVE off of this powder. Huel, you’ve really bungled this. You have turned a Fanboy into an ex-lover.

i get what you are saying about the switcheroo being pulled on you. i have only been using Huel for about 2 weeks, so i missed out on the transition. i have read a few posts about this complaint, and people wanting to order the original again…i think that if people keep up the conversation about the dissatisfaction with the new flavor that the company might revert back, or at least make some kind of option to the new vanilla to have it more taste like the old vanilla.

i am enjoying the flavors that i’ve tried so far, and have found many different ways that i can tweak the ingredients i add to have my shakes taste super good. look for some of my recipe posts around here and enjoy.

@nachosalad78 the new vanilla really overpowers the things that I’ve always added in (instant coffee, cocoa powder, cinnamon, and others). It would take a lot to mask the flavor. I even tried two scoops original with one scoop new and that’s all I could taste.

I am disappointed too. I just ordered a bag of chocolate and it tastes awful - the sucralose or whatever just destroys the flavor. Now maybe I am out of the mainstream in this regard, because I have always hated artificial sweeteners. I have tried them all and they all add an unpleasant chemical taste to everything. Only stevia comes close to being edible, but even that is way behind natural sweeteners. The flavor boosters have the same problem.

Now I will have to look into ways to neutralize that awful sucralose taste. If anyone has a good suggestion, please let me know. But from now on I will only be ordering the plain, unsweetened version.

That’s your answer. You can do a lot with the UU, adding fruit, honey or any sweetener of your choice, if you want some sweetness. If you still have the sweetened flavors you can try mixing them with UU as well as adding natural ingredients that you like. I know that many people don’t drink dairy milk these days, but I add homemade kefir which is very tangy and cuts through both sweetness and earthiness.

U/U Huel + 2 medjool dates (minus the pits, and has to be blended) is a good comparison to the level of sweetness of the other Huels, minus any flavoring. I had really good success with U/U Huel + the dates + banana + cinnamon + or - PB.

Huh. I am actually surprised at people’s response to the chocolate and new vanilla. Maybe because I blend in milk they have all tasted good. Chocolate Huel powder is quite tasty. And yesterday to be certain, I did my first new vanilla scoop as a control in water/ice alone, and I actually thought it was pretty good on its own. Today, the wife had the new vanilla in almond milk with the Huel Chai flavor additive and it she loved it.

I can see why people are comparing the new vanilla to cake batter, because that’s exactly what it remind me of. Hey Huel, an easy fix would be to rename this new vanilla as Cake Batter, and then add back original vanilla to inventory and call it Vanilla. It would not only reduce confusion, but be more accurate in the naming, and give people more options.

I have ALWYAS been extra sensitive to artificial sweeteners as well. I thought I was going to have to give up Huel, but for me the solution has been a 1:1 ratio of choc/vanilla + unsweetened unflavored. Give it a shot!

Totally understand your concern, and I appreciate your passion for the Original Vanilla. The change was brought about due to many complaints of the previous formula–we concluded that it was too “synthetic” tasting so we improved the vanilla to a more natural flavor. It is unfortunate when things like this occur because we are unable to please everyone in the process.

I DARE YOU, DOUBLE DOG DARE YOU to try one of my recipes posted here in the forums and come back and tell me that these aren’t the best darn tootin shakes you’ve ever had!!

(almost willing to put money down on that) BET

A new trick I have learned from somebody on this forum (I forget who) is to use cold brew coffee for some of these. I use decaf since I am sensitive and drink this as my work dinner. But it works really well.

8 ounces cold brew + new vanilla Huel + oat milk + chai flavor boost is also really good. Without the chai it then becomes more of a latte style drink which might also be good. 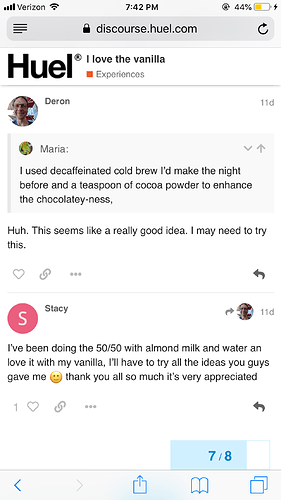 I’m currently working out some low-calorie booster hacks - if you’ve kept updated on my thread. So far the moringa/matcha green tea and horchata/coffee work well, but I’m still exploring. I’ve got a few ideas to try next, but I’m not sure how the taste will come out since I haven’t made them yet. Possible combinations to come are:

The rest are just notes for an idea. I’m kind of focusing on getting a praline flavor because I LOVE pralines, but I don’t know if the process of adding baked caramelized sugar would lend itself easy to mix into Huel as-is because of its higher melting point. Just a theory for now and these are just my notes:

I have tried some tricks that did not work. I have mixed them with Soylent and UU, tried a couple of flavor boosters, tried adding sugar, but the artificial sweeteners shine thru and **** everything up. But on the positive side I really like UU Huel! It is pretty good on its own, and I have found a couple of ways to improve the flavor. And of course the nutritional quality is exemplary.

I bet those are good. But that would take more time than I want to spend on it. Part of the attraction for me is the speed and lack of required washing up.

I agree with the original poster that unfortunately it’s not a good switch. I’ve used Huel for well over a year now.

As a standalone the new vanilla is fine.

The main problem with it is that has another poster put it – the new vanilla overpowers anything added to it. I keep it pretty basic to keep things simple, but my 3 go to recipes to add variety now suck. The new vanilla is so strong that adding anything… why bother.

I haven’t tried the flavor boosts in the new vanilla - I can’t imagine based on my other recipes that the boosts do as well in the new formula either. I didn’t find any of the boosts remarkable enough to order a supply originally anyway.

Put me down as disappointed as well.

Hey Huel, an easy fix would be to rename this new vanilla as Cake Batter, and then add back original vanilla to inventory and call it Vanilla.

I haven’t tried the new vanilla but assume I’ll love it because … cake!! Love this suggestion and hope Huel will seriously consider it.

Actually mixing chocolate with uu works out pretty well. That is what I’ll do going forward. I tried that with the old vanilla and it was not very good, but I guess chocolate has a stronger presence. But I still maintain that Huel should reexamine their recipes and try to eliminate sucralose.

I quite agree: the new vanilla is horrible. It’s similar to those vanilla meal replacement powers readily available in drug stores. Fortunately, I also ordered a bag of chocolate flavored Huel. Mixing them together makes the vanilla tolerable. That said, I quite like all the other flavors and flavor powders. But, the new vanilla is simply putrid.

I ordered Huel because it was healthy and tasted healthy. Now it just tastes like any regular brand vanilla protein powder. Not a good look.