Now this tastes like home. Like any good American, I was raised having cans of Cambell’s tomato soup with toast (or with rice) for lunch, and this manages to come pretty close to that flavor. Having said that however, it also tastes just a bit boring - but familiar. The tanginess of the tomatoes comes thru nicely, and the texture is a little better than that of the Thai curry flavor.

This has many of the same good and bad points that the Thai version does. There are some gritty chunks that do not absorb enough liquid, but that seems a little better with this. And being able to chew and savor the food allows me to eat less of it and feel just as satisfied. So for me a 400 calorie serving of this makes me feel as full as a 500 cal serving of liquid Huel or Soylent does. I wish it cost a little less but the price is not exorbitant and I trust that the nutritional content and quality of the ingredients is very good.

So thank you, Huel. Now I am looking forward to trying the Mexican flavor, and wondering what else will come out of the Huel kitchen. Chinese flavor? Indonesian curry? Hungarian goulash? Keep up the good work!

I’m a huge fan of Huel and have gone through countless bags of the shakes and really like them all - the new flavor Salted Caramel especially. So this last order I took a shot with 3 Hot & Savory flavors. I’ve only opened and tried Tomato & Herb so far but to me it’s just awful. Sometimes my first impression of a new Huel flavor or edition isn’t that good and I grow to like it, but I’ve tried 3 meals of this and I can’t see myself ever growing to like it. I don’t care for the texture but I’d be ok with it if it tasted good, but as the OP said it’s bland for one. But it just doesn’t even come close to a good tasting tomato soup.

I also agree about the gritty chunks that I have gotten better at mixing in. I’m going to try some of the techniques I read in here to see if it imp[roves that part. But I can’t see anything rescuing the flavor short of maybe dumping in some hot sauce and salt or something like that. I’m going to try 1 or 2 more but I don’t think I’m going to eat all 7 servings, it’s destined for the bin before it’s gone.

I also bought a bag each of Indian Curry and Mexican Chili so hopefully those are better. But I think from here on out I’ll stick to the shakes. And BTW the word “chili” only has one “L”, there’s a typo on the bag. Maybe it’s fixed by now.

I have to admit that Tomato & Herb isn’t my favorite Hot and Savory flavor by itself, but I like keeping it around for what you can add to it. I’ve used it for filling an omelette and adding some ketchup for something similar to omurice for a breakfast or lunch option on days when I want more calories. My favorite thus far is using it atop spiralized vegetables to have something like pasta: 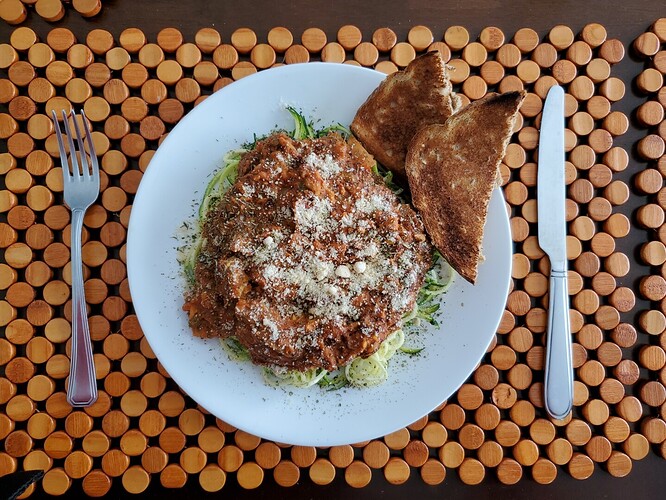 Hey, that is creative! I have to admit I have not yet gotten into using Huel as an ingredient in dishes. I like to just have it on its own, at least for now, but I might try that some day. I guess you could reduce the water quantity for a thicker savory Huel, and do like you do, put it on pasta or vegetables or eggs. One could add plain huel to breads, pancakes, or brownies to add nutrition.

Are the curry and chili versions better? Maybe savory huel just isn’t for you.

I bought 3 bags of savory, the tomato and also the Chili and Curry, but I haven’t opened those yet. I’m sort of dreading it. I love curries and chili, but I have a feeling these are going to fall short like the tomato but I’m going to give them a try soon and will write up my impressions. At least I hope they’re not bland like the tomato. I’ll know soon.

At first I thought that maybe I didn’t make sure that the bag was fully mixed, but after two servings…I think the Tomato/Herb isn’t spiced enough. I added a tablespoon of Pampered Chef’s Sundried Tomato & Herb and it’s much better.

Yes, it does not say anyplace that you can’t add a little something to H&S to spice it up a little. That stuff you added sounds like an excellent choice. I have had success adding lime juice and salt to them, fresh cilantro too, when I have some around. Bon appetit!