The vanilla is just too sweet

I am new to Huel and I really like everything about it but I ordered the vanilla and it is just too sweet. I cannot make it through a serving. Does anyone have any ideas on what I could cut it with(other than bananas) to make it less sweet?

Personally, what I’ve been doing is adding more water. Instead of two meals of a cup of Huel in the shaker, I do four with half a cup. As a bonus, it also mixes better and I’m getting more hydration. On the minus side, it’s more watery and has less flavor overall.

The best shake I have had was 32 g of unflavored/unsweetened, 32 g of vanilla and 12 g of 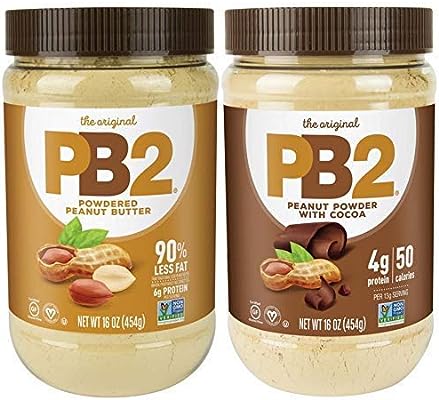 the chocolate peanut butter powder is OUTSTANDING, and each shake is only about 300 calories so I can have 3 a day then I do meal prep chicken and rice with veggies for dinner and still be around 1500-1600 calories for the day.

The regular peanut butter is also really good, but the chocolate one is definitely my go to…I think I’ll have one now!

Sounds delicous. I might have to take a look into it

I use unsweetened / unfavoured mixed with vanilla to vary sweetness

Same here. Just changed my subscription to be more Unsweetened / Unflavored than Vanilla instead of half-and-half because I tend to use a 2:1 ratio of UU to Vanilla.

I wanted to try the vanilla, but i agree: it’s too sweet.

Your best bet would be to order more Huel and mix 2:1 Unsweetened/Unflavored to Vanilla.

Once you finish the vanilla you can sweeten the UU with 100-150 mL of orange juice (or lemonade, or sweet tea, or whatever you like)

Until you can get the UU, if you have a good blender or food processor you might try a smoothy of the greens most people can’t stand due to bitterness (I’m looking at you, kale and your cousin spinach)

It’s not ready to balance sweet with savory such as curry or cinnamon/cloves/nutmeg is more difficult here because of the vanilla. You could use unsweetened cacao or bitter chocolate because chocolate and vanilla are really good on a team together. I tried instant coffee didn’t have enough sweetness for the raw punch of coffee (though the extra sweet and vanilla might work well)

I’m trying to imagine sours like tart cherry or lemon juice, but the vanilla gets in the way again. I would also try apple cider vinegar, perhaps with some cinnamon - if only the problem were just sweetness, but the vanilla flavor really doesn’t play well with acidics.

I like vanilla flavor; it really is a shame that it is so sweet. Good luck, do share what you find.

This sound like a really great idea thank you!

Any time, glad I could help. Let me know how you like it

I ordered the vanilla. And the bag says vanilla. But I dont taste any sweetness and or vanilla flavoring to it at all. Perhaps mine was packaged incorrectly. But I do like it now that I have gotten used to it with water alone.

I recommend adding more water to your Huel Vanilla shake to help reduce sweetness and this also results in a smoother shake.

If you have any questions regarding your Huel please contact support@huel.com

taste any sweetness and or vanilla flavoring to it at all. Perhaps mine was packaged incorrectly. But I do like it now that I have gotten us

Incorrect packaging would be possible, but it seems unlikely. That would be a really big “oops” and we’d probably be hearing about it from others. This is only my personal conjecture, but I suspect there may be (or may have been) some variation between bags or batches that contributes to the very varied opinion about how sweet the vanilla is.

However, if you are questioning whether it is vanilla, I think the easiest indicator for differentiating the two is smell. If you open the bag and it smells at all sweet or like vanilla, it is the vanilla and not the Unsweetened / Unflavored.

I had the same problem. My first order of vanilla was delicious and sweet. My second order that I received a couple weeks ago smelled sweet, but was completely flavorless and chalky. Huel sent 2 new replacement vanilla bags from the same batch (#93385) and they had the same issue. I’ve contacted support again but had no response back.

I’m hoping this is just a manufacturing issue and not some kind of adjustment to the recipe because it’s really unpleasant to drink.

Apologize, I’m currently on Christmas vacation and have limited access to my emails.

We have not adjusted our recipes.

I have contacted you via email.

Thanks Sothan. You’re the man

Bananas will make it sweeter actually in my experience. What I did when I was using the vanilla one was to either use strong coffee/espresso instead of water or add a heaping tablespoon or 2 of unsweetened cacao powder.

I don’t like the sweet. I was fine with the non-sweet vanilla. My next shipment I guess I’ll try the unflavored…?

I use unflavored then add 100 mL of diet V8 Splash before topping up with water to the 500 mL suggested liquid volume. It adds just enough sweet taste without adding extra sugar, and the red “juice” gives it a little flavor so it’s not bland. Generally the neutral aspect of unflavored/unsweetened let’s you make it however you want by adding whatever you like.

Lol! I trade you! I want bags like the first two Huel sent me that had the unsweetened vanilla flavor.

The three I received (well… at least the first one I opened) are sweet and I don’t really care for them… Not into artificial sweeteners.

I wish I would have known that the first two bags were rejects so I could have noted the batch number and requested more like them.

I personally think Huel should not add any sweetener and let the customer add whatever additional sweeteners they wish.

It sounds like the unflavored/unsweetened option would be perfect for you! Personally, I either do a 50/50 mix of Vanilla and U/U Huel or 100% U/U with monk fruit and powdered peanut butter. Hope that helps!