I think I might be one of those people that get digestive issues from Sucralose. I got the unsweetened Huel which is fine but I need a touch of sweetness. From what I’ve read plain Stevia doesn’t seem to cause many people problems so I’m going to try that. Anyone else do that that could recommend a good Stevia product that isn’t processed too much? Is it better to use liquid Stevia rather than powder?

I have “borrowed” my GF’s stevia packets for use with Unsweetened Huel as part of my concoction. They work really well. But I don’t know the brand. It’s the first party Publix brand from the grocery store. I would think that individual packets of the powdered stuff would be better than a liquid. The liquid is likely a multidose and it’s easy to overdo it with liquid artificial sweetener syrups. Unit dosed packets will prevent this.

Just any product at your local store where the ingredient is only stevia and no sucralose should do the trick.

(But as a side note, I do well with vanilla Huel, so I don’t have issues with Sucralose. I just happened to use a stevia packet for U/U Huel.)

For a time, I used monk fruit sweetener and also added a variety of flavors in my U/U Huel. My overall favorite so far is a splash of hazelnut coffee creamer and no additional sweetener, actually. Some people mention using our flavor boosts with a sweetener and some vanilla extract as the flavor boosts are formulated ideally for our Vanilla Huel and don’t contain any sweetener on their own.

Huh, never heard of monk fruit sweetener. I’ll look into that. Thanks for the tip. 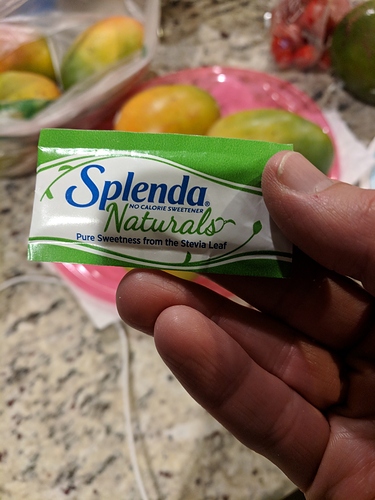