I know this info must be around somewhere, but when I do a search I come up with the old version of the FB which says 32mg. Can I get a confirmation of the caffeine amount in the latest version? Thanks. 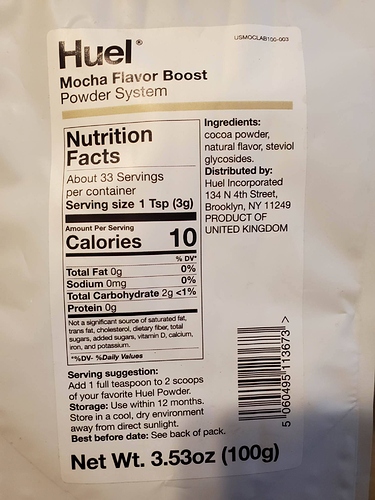 Looks like they removed the caffeine? Never knew it used to have it though.

Thanks. I only have the taster sachet, so there is less information. The older version used to taste a lot more like coffee though, so I’m not terribly surprised. I find that this tastes more like Buttered Toffee. I happen to love Buttered Toffee, so it’s not a problem

The older version also had powdered instant coffee in it. One serving had like 30 mg caffeine, give or take. I still have some of the old mocha stuff. Put it in the wife’s Huel when she needs a small caffeine boost.

Looks like the new stuff has no instant coffee in it. So with cocoa powder only, you’re looking at much less caffeine, I’d say.

Looks like they removed the caffeine? Never knew it used to have it though

i thought i read it…

How is this possible? Is the cocoa powder decaffeinated somehow?

For starters the flavour boost contains more than just pure cocoa powder and also the amount of caffeine varies between different cocoa powders.

I’m sorry, because of confidentiality between Huel and the flavour houses we use I can’t provide anymore information, but the caffeine value has been confirmed through lab tests. I know that’s frustrating as it’s great to learn, sorry again!

Good to know, thanks.