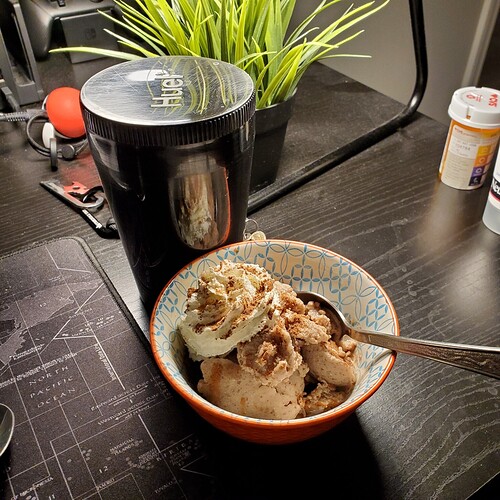 So, my usual comfort food is either Taco Bell or takeaway Chinese food, but occasionally I really want some ice cream. Normally, my cravings for ice cream don’t really align with a meal, which makes it difficult to have it when I want, and it doesn’t work as a snack alone. So I decided to try and make a frozen version of Huel that wasn’t a popsicle.

My first attempt without looking up other recipes for ice cream based on protein shakes or meal replacement shakes, I assumed that a Huel shake base would work more like a sorbet base than a cream base. As such, I attempted to make a frozen Huel dessert like a sorbet, using a combination of alcohol to help lower the freezing point and avoid it turning into a gigantic block of ice, and using meringue to help incorporate more air into the final product. 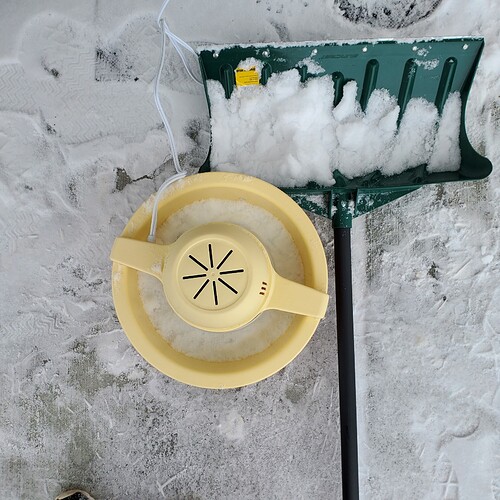 First I created a quick meringue with the two egg whites and some cream of tartar, beating them into stiff peaks. Then I mixed the rest of the ingredients together and poured it into an ice cream maker. I let it churn for a bit according to my maker’s directions and added the meringue into the maker just before the churn finished. Afterwards, I poured the mix into a chilled bread loaf pan, covered it in plastic wrap, and stuck it in the freezer to further set.

It, well, its taste reminded me of eating Halo Top, which by all accounts means a successful frozen confection. The experience was definitely not like eating full-cream ice cream, and the texture still ended up a bit icy after it set. In addition, the entire top layer froze solid on me in the fridge. The middle was still scoopable and reminded me of a slightly-melty ice cream, which at least was a consolation as I worried I basically made a loaf-sized popsicle.

Sorbet method is so-so; any suggestions?

I think I ended up with something passable for those times when I want a frozen treat to accompany a meal, or to just have ice cream at times when an actual serving of ice cream wouldn’t work. However, the sorbet method definitely didn’t make the product I was thinking I would end up with.

Of course I did searching on the Internet on alternative methods after I attempted this experiment and a lot of them suggested using Greek yogurt. I might try that next time. Any other things I could try to make a, well, better end result?

What about making it into a custard? (You would have to cook it and I don’t know what that would do to the nutritional value of the Huel). I used to make custard in my freezer and it turned out great. (Unfortunately I no longer have the exact recipe that I used.) It may have been luck, but my home freezer did a fantastic job of freezing it perfectly.

What about making it into a custard?

I worry about cooking Huel powder in this context as well, but I’d imagine that it’d work well with a custard base, too. For my needs, I would need to be careful with how many carbs I add into the mix, but I’d imagine it could work swimmingly if you, say, make a custard ice cream base and then utilize Huel like a mix-in.

@sentamalin you my friend are an innovator! Was the process fun and something you would do again?