So my trusty(not so much) hand blender that I bought from Amazon for 15 bucks broke after about a month and a half of use. Heavy use, mind you, I have been using it every single day for almost every meal that I eat which is now Huel. So I ran out to walmart, bit the bullet, and spent 40 bucks on a Kitchen-Aid hand blender. This one has noticeably better construction, less plastic, more metal. But also, for the first time ever, I bought the 2 year replacement plan on it because the other stick blender that I bought didn’t even make it 2 months. For now I like this one more. The button on it is easier to push and hold down, and it has 2 speeds which is really fancy. That’s twice as many speeds as the amazon version. And the replacement plan guarantees that I will have a blender that works for the next 2 years. I really don’t want to have to keep buying them. My blender breaking threw the whole day off. I didn’t start eating in time. Had to eat out because I was out of the house and didn’t have the Huel cooler on me stocked up. We’ll see how this one goes. For now, I would recommend spending the extra money on a blender like this with the warranty if you plan on using Huel long term. 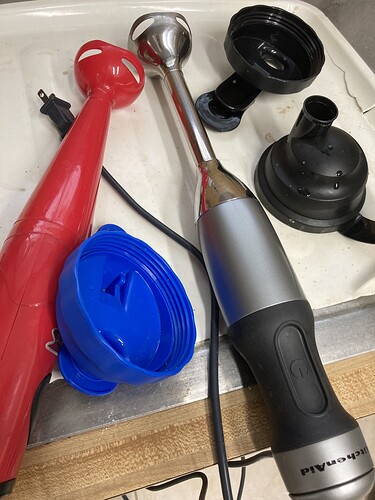 That looks like a later model to the one I have.

I’ve had mine for years.

that’s a lot of Huel

Thanks!!! I’ve been considering getting one of these but haven’t bitten the proverbial bullet yet. I’ll keep this in mind and get the Kitchenaid one when I get around to ordering one.

Is the “proverbial bullet” a nutri-bullet?
That would work too.

Sometimes you just have to level up! Glad that the new blender is treating you nicely!

I guess we have all been burned by inferior #$% purchased on Amazon at bargain prices. It has happened to me too! Mama told me to not buy cheap junk.