Hey everyone, I created an account specifically to talk about the caffeine issue of the new Huel formula. I will copy and paste my reply to another thread regarding caffeine in the v3.0 formula:

‘ Hey everyone, I created an account specifically to reply to this post. I’m a long time Huel user and was a bit irked like lots of people about the addition of kombucha in the new formula, seeing as though kombucha is such a specialty and is very hit or miss with people’s digestion; it’s certainly not a nutritional source that I would describe as ‘for everyone’.

Anyway, I emailed Huel asking if the new v3.0 unsweetened and original powders contain any caffeine, and Alex from Huel confirmed that they DO contain caffeine as a result of the kombucha. This response was only last week so has something changed in the last few days? Has the caffeine been extracted from the kombucha before being powdered and being put into the Huel? I don’t think it’s fair to say that the new Huel contains no caffeine just because it may be a small amount - some people may be especially sensitive to it or want to avoid it for religious reasons (I fall into the former category).

I think we need to clear this up, because if the new Huel v3.0 contains kombucha, then it should contain caffeine too, unless it has been specifically chemically extracted out. If the caffeine hasn’t purposely been removed, and your tests show that there is no caffeine in your Huel, then I have to question the quality of the kombucha in the new Huel

TLDR: all flavours of the new v3.0 Huel contain caffeine.

Caffeine is in a lot of products. They have already said that the caffeine content is a few milligrams at max. It will not keep you up. I am not understanding where anyone would have issues unless you are religious…

I think @Dan_Huel mentioned in another thread that each 400 calorie dose of Huel contains just a few milligrams of caffeine. It’s similar to a cup of decaffeinated coffee. Although technically not completely caffeine free, the amounts are not enough to have any noticable effects. I have Tourettes and am highly sensitive to caffeine. Yet, I don’t feel any effects unless I ingest at least 15 mg and then I can handle up to 30 mg per day with little problem. I will drink up to 20 ounces of decaf and feel nothing. When I drink a dose of the chocolate Huel, which has maybe 15 mg caffeine, I feel a mild buzz for a few hours and not much else.

I am fairly certain that vanilla and berry Huel 3.0 contain such little caffeine that nobody would have any noticable effects. Even in highly sensitive people who don’t normally intake caffeine. 3 mg caffeine diluted in a 70 to 90 kg human is so insignificant.

Just to keep things in perspective, this is a typical old school coffee 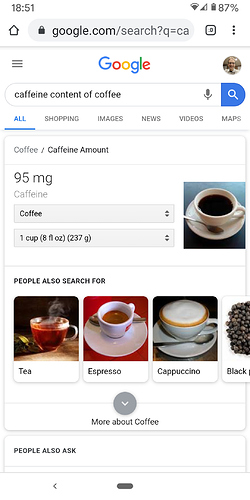 The difference would be that what you were told initially was a general response - kombucha in general does contain caffeine. However we went about getting it tested and this was the result.

Hi @Dan_Huel. Can you please add caffeine measurements to your packaging? I don’t see it on my bag of Huel 3.0 chocolate. This would be a great step for transparency and resolve any confusion.

It’s not on the pack because the amounts are so low and it would probably create more confusion if people don’t know that chocolate naturally contains caffeine. I hope that makes sense.

Thanks for your helpful response @Dan_Huel. In fact 5mg is much less than I would expect for a product containing cocoa powder and kombucha. That is a great reason to add the measurement to label with a short note putting that number in context. Your consumers are very smart! They’ll get it. Thanks for reading.

I maintain a strict non-caffeine diet, and I can’t stand kombucha. I just came to the website to re-order my Huel, and find there’s no caffeine- and kombucha-free version available. So, I created this account to let the company know that they just lost a regular customer over this.

I’m really sorry to hear this.

As mentioned above the amount of caffeine in all the Powder flavours except chocolate is below levels of detection i.e. none.

Kombucha also doesn’t bring any flavour to Huel don’t worry, I can’t stand the taste either!

Yeah i was just about to order the unsweetened/unflavored powder but hearing there is some caffeine makes me cancel my order. I usually never have caffeine, but when i do i drink half of a brisk iced tea can, which has 8mg of caffiene… and that usually interferes with my sleep 15hrs later.

Holy snikee. You are more sensitive to caffeine than I. I think the new Huel 3.0 U/U may end up having like 2 or 3 mg caffeine per serving. I still don’t think it would affect you even as sensitive as your are. But that’s just a guess .

I assumed all ice tea had like 30+ mg caffeine per serving. Didn’t realize that brisk was so decaffeinated 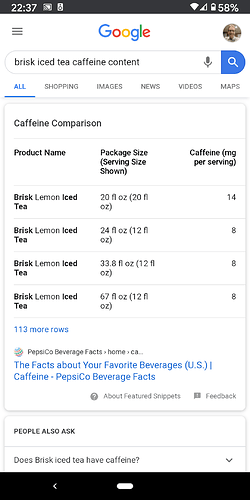 I decided fuck it and ordered the u/u and huel black vanilla. How much caffiene does huel black contain? I see there’s green tea extract in here

There’s below detectable levels in the vanilla flavor and because cocoa naturally contains caffeine there’s around 6mg per serving of Black Edition Chocoalte.